hey everyone, click here to learn the details of my little cooking project for the year!

week 4 – green beans –vegetable crepes – eatingwell.com (recipe modified)
i didn’t have any zucchini so i used 1 red and 1 green bell pepper instead, i omitted the corn and i also included green onions but i don’t think i would use them next time, otherwise i really liked the mixture we put in there. honestly a few small chopped apples would have been really delicious as well. i used the processor to grate the cheese (which i later realized was unnecessary since the cheese would be melted but oh well) and i used it to chop all the veges which took seconds=awesome. i made the green beans very small so jared wouldn’t notice but he did anyway, i’ll have to learn more disguising techniques as the project moves on. he still liked it though so i still win! also, i realized i am not so great at making food look good so it definitely tasted better than it looked! 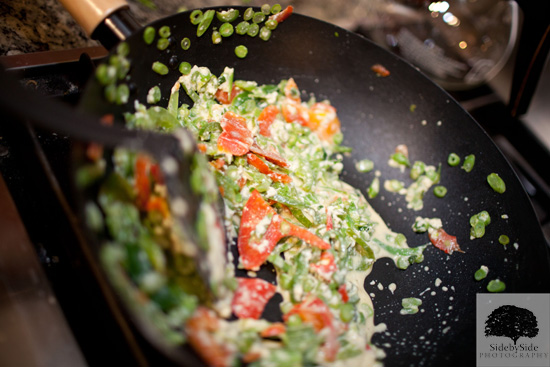